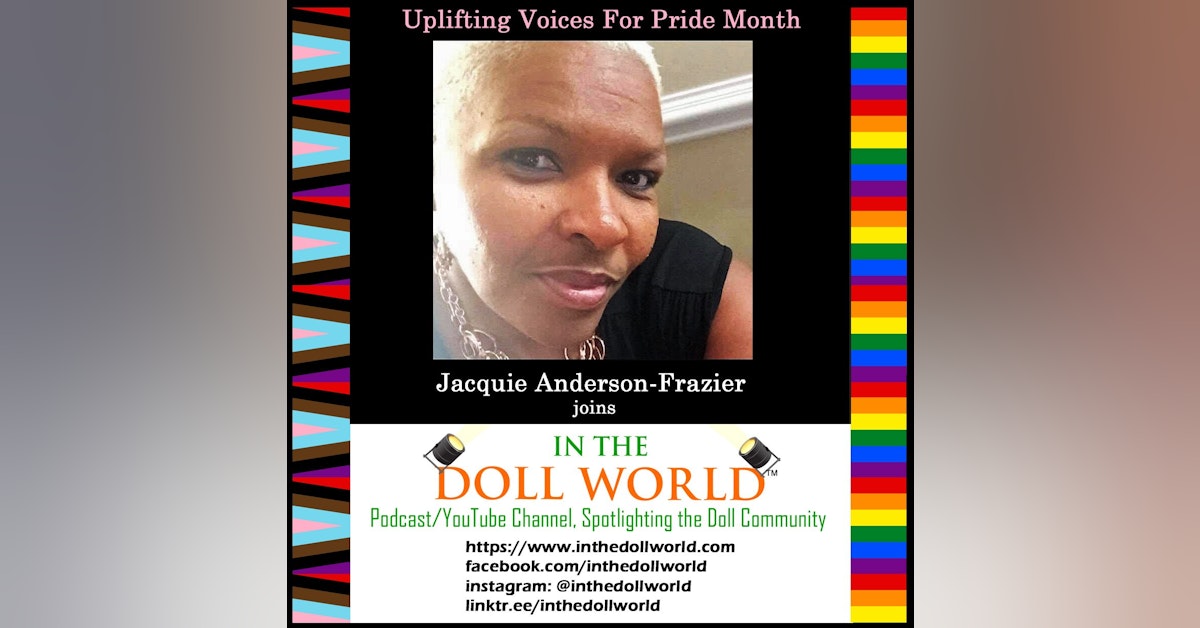 In The Doll World (ITDW) doll podcast and YouTube channel continues its PRIDE Month Celebration with a powerful interview with Jacquie Anderson-Frazier, owner of the online store KittiJ's Boutique. Jacquie is also a diorama maker and doll customizer.

We found Jacquie to be beautifully powerful and honest. She was also very truthful--including telling us that she doesn't understand people's fascination with other people's sexual orientations. She described the fascination "perverted'!

Jacquie also shared wonderful stories about her doll journey. She loved dolls as a little girl. When she grew up, she bought them for her daughter and then her granddaughter.  Jacquie was a lover of miniatures. So, she collected lots of doll-sized items. Then one day, she found a doll that re-ignited her love of dolls. From there she went on to collect dolls. She was unhappy that the variety of Black dolls was less than the the variety of white dolls; so, she began purchasing white dolls and using their clothes and accessories to redress and customize Black dolls!

Jacquie dated men until 1985.  She described her "coming out" as boring because she said she always knew she liked women; "It just was." Jacquie said. "I never felt I owed an explanation for my sexual preference".

Jacquie also confirmed that relationships are basically the same: she met a wonderful woman, they dated, they fell in love, and they got married. They have been married for over 16 years and have been in a relationship for almost 30 years. Jacquie didn't think the country would accept queer marriages in her lifetime. She and her wife have 3 children and 9 grandchildren.

To learn more about Jacquie and her creations, visit her KittiJ's Boutique at: https://www.facebook.com/KittiJs-Bout...

Thank you so much for listening to In The Doll World, if you enjoyed the show, please click on the "reviews" tab or send us a voicemail and let us know.

We look forward to bringing you more amazing doll creators and creatives within the Doll Community. Until next time, add a little joy into your world by collecting a doll, sharing a doll or giving a doll a home.

Email has been submitted.